Let me be honest, I love Facebook! When it first came out, I hated it, really hated it. It was the nosy, tell all, put my life on blast, gossip site, but now I love you facebook! I never thought  I would break up with myspace, to start a new relationship with facebook. Myspace was good to me, treated me well, but like most relationships we eventually outgrew each other. Myspace is like a sorry ex boyfriend who is not as cool as my new boyfriend, Facebook!

Since I live on a Island thousands of miles from the mainland, facebook has been the major link to the my friends and family scattered throughout the continental US. With facebook I feel like I have never left my best friends and they can see my pictures of the island. I can  keep up with family members who I haven’t spoke to in years, and I now know what happened to those people from High School who I thought I would never see again in life after the music stopped on graduation day.

Facebook, you are not so bad after all. You do have some negative, annoying traits that I can’t stand,  but it wouldn’t be a real relationship if you didn’t right? So I guess I will just like what I can tolerate about you, and ignore the rest.

I know a lot of people who use facebook, I even met a guy who asked me if I had facebook after I denied giving him my number. Of course I lied and said no! I didn’t want to ever be a memory in his mind after I escaped his conversation. So it has become a common thought to just assume that everyone has a facebook account or two.

But lately I have met a few men who do not have facebook accounts!  Yup, they really are not on facebook, how do they survive!  All are random men who do not know each other. So, it’s strange that they all have the same response when I ask why; “Facebook is the devil”.  The devil? To me it seems a little harsh to call it the devil. Then I thought:  facebook is not the devil, but people who use the account can turn it into what may eventually become their own personal hell! 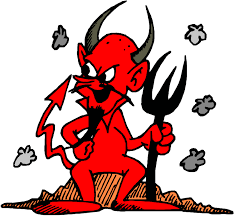 I will admit facebook is addicting, one of my friends recently compared it to crack. And yes it can cause trouble, if you allow trouble. However, you can have a safe, friendly account if you use it the right way. I know people who have gotten into fights with their partners because of pictures that pop up through friends tagging, random friend requests, racy comments, or the high number of friends they have. The truth is, if you respect your account, and respect your partner then there really should not be anything to worry about. You can always delete people who do not respect your relationship! Don’t do dirt, and the dirt won’t be able to find you.

The devil and facebook do have something in common: they both prosper with the power from mankind. People give the devil and facebook the power to work in evil ways. The internet is full of a variety of information about the lives of many people. I will admit that I have googled men that I have went out with just to see if I could find out anything about them on the internet. Yes, a lot of people do that! Personally I like to know what I am getting into to beforehand.

With facebook, people get a firsthand look into the lives of others. They will end up knowing your friends, family, exes, and friends of friends. Pictures of dinners, vacations, and even your work environment may pop up.  Life becomes an open book, and if you dig deep enough you will know the full story (or have enough information to create your own story). Facebook stalking has become the common silent conversation, new age snooping with less work.  Therefore, it becomes the responsibility of the individual to make sure your life is clean, and there aren’t any shocking, incriminating photos that will compromise your own integrity. Maybe with the new internet generation we will all live a more moral life because of what may come out. Probably not. But be smart when using the internet or facebook. Pictures are taken and posted everyday. So even if you are not on facebook, it doesn’t mean your picture won’t show up somewhere.